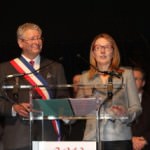 The Fougère d’Or awarded by the City of Fourqueux
Imagine for Margo has received the « Fougère d’or » by the Mairie of Fourqueux.  That is an annual prize during the ceremony of greetings, that rewards an association that has particularly marked the year.
The prize was awarded with the presence of many political figures: Senator Larcher, the député-maire Morange and 10 mayors from nearby cities, etc… Great visibility for our association and for the cause of children’s cancer!

A big THANK YOU to the city of Fourqueux and her mayor, Daniel Level, for their support!