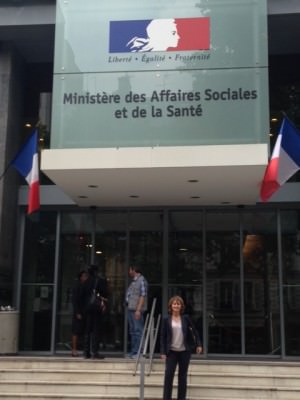 We took the occasion to show our determination to ensure the introduction of the measures planned in the Plan cancer 3 for children and adolescents, and to propose that France pushes for a European regulation that would encourage labs to invest in pediatric research, taking inspiration in the Creating Hope Act, voted in 2012 by Barack Obama.

On the progress of the cancer plan, we have learned:

The agreement about the introduction of a pediatric cooperative group (that will facilitate obtaining public funds from the hospital clinical research program (PHRC), it will give more independence, and in which the representation of parents associations will be mandatory).

– The introduction of 2 or 3 pediatric “CLIP”. These Labelled Centres of Priority Investments will give children access to clinical trials in early stage, in a secure environment. It is indeed essential to facilitate the access to therapeutic innovations in these centres, because up to now, any pediatric test has been refused by the existing CLIPS, as they focused on adults. The call for offers will be launched in July, and the firsts funding rounds are planned for the end of 2014.

– On the occasion of the creation of the CLIP, many labs have been contacted to supply the molecules and to participate in the pediatric programs.
These are already concrete developments.

– We have insisted on the importance of providing quick access to the therapeutic innovations, with the re-thinking of clinical trials (with smaller patient cohorts), and speeding up the authorizations of the Agence Nationale du Sécurité du Médicament (ANSM), notably for the cases involving rare cancers or relapse.

– We have also proposed the introduction of an “observatory of children’s cancer and research” that would formalise the objectives defined for children’s cancer, the indicators or results and the state of the advances. The annual report would be published.

The idea has been received favourably and we will work alongside with the INCA on this topic, particularly on the monitoring indicators.

We are satisfied with this meeting but we will remain vigilant on the advances regarding the measures in the Plan Cancer 3, which we will follow up in detail.

Several associations accompany us in these steps, and the associations’ working groups are being formed – more info to follow.