We would like to express our deep gratitude to the contributors and participants for the high quality of the discussion at our 3rd Seminar “Towards a Targeted Research for Children’s Cancer”, held at the Luxembourg Palace in Paris last Saturday.

Here is a summary of the themes covered before a detailed analysis is available soon.

France, Leader of European Legislation?
The seminar started off with the announcement of UNITE2CURE, a European movement of charities, which have gathered together across France and Europe in order to lend greater weight in their dealings with National and European authorities.  The organisation is starting off and will soon grow across other European countries.

An Appeal to the European Commission and the Health Minister
The current Pediatric Legislation allows companies to not do any development of their medicine for children, even though the mechanism of action of the drug could be beneficial to children’s tumours.  This is not acceptable, even less so as science is moving forward with great vigour and children must not be excluded by research.

TOGETHER, researchers and doctors, parent’s charities, drug companies and European regulators, addressed the European Commission, at the end of January, with proposals for modifications to pediatric legislation.

We asked for the backing of 3 key members of parliament to promote the cause of pediatric cancers within the European Parliament, the National Assembly and the Senate.

We now need the Minister for Health to support our proposals with the Council of the European Union.  That would be an essential step in our European mobilization. Research is European wide and one of the first levers to accelerate research would be to modify the legislation.

The Impact of Sport on Cancer

The Charity Sourire a la Vie (Smile at Life), presented its primary research finding to us, which were extremely promising on the impact of sport on children when they are ill. This project is going to be adopted in other regions of France and soon in Paris.

Having presented what sequencing is, molecular portraits and in which way the company Integragen assists doctors in making decisions, we were shown the advancement of research programs into new treatments that have been put in place in France and Europe.

These projects have progressed thanks to the involvement of all the following groups: charities, doctors, the INCA, the ARC foundation for research, the “Ligue Contre le Cancer”, as well as some companies who have all made commitments and offered financial backing.

So, the computer assisted learning pediatrics programs (CLIPP) so named by INCa to undertake early phase clinical trials have been set up and an INCa research project will be launched in the next few weeks.

For children in relapse or with treatment failure, a big program of tumour sequencing has just started and the program AcSe-ESMART, the first of its kind in the world for all types of children’s cancers, has been registered with the authorities on 18th February with a start date in the second quarter of 2016.  3 laboratories have agreed to give their molecules, 4 others will follow suit soon.  Imagine for Margo has raised 1 000 000 Euros so that this program can come to fruition quicker.

To continue in the theme of innovation, we presented how we can, by means of a simple blood test detect information about cancer (analysis of the tumour’s circulating DNA) as well as the latest information on leukemia. Two labs came to present to us how, they too, are committing to pediatric research either by creation of an immune oncology Foundation (Laboratory BMS) or in having a dedicated team and program (Roche-Genentech laboratory).

If a good dynamic is being created to ensure the evolution of legislation and the development of research and in rethinking clinical trials, we still need to ACCELERATE access to safe innovation for children and adolescents with cancer.

This is what we are determined to do, never giving up, with the message of Margo ringing in our ears: GO, FIGHT, WIN!

Here is the agenda of the 2016 Seminar 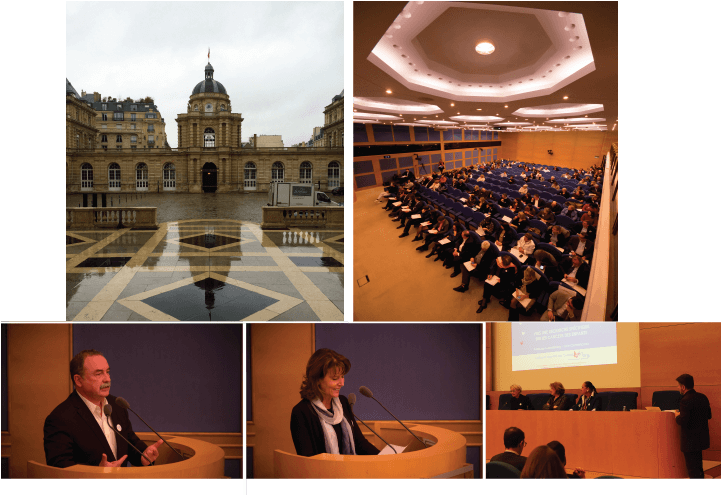