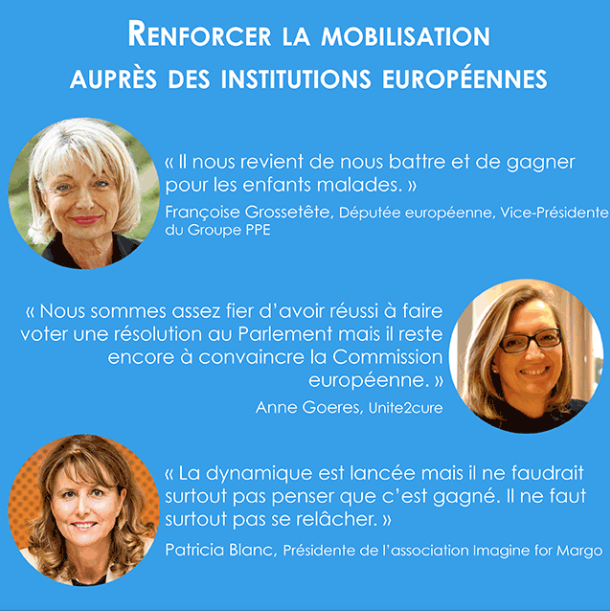 A video of Mrs Françoise Grossetête, Deputy to the European Parliament, Vice-president of PPE Group (European People’s Party) when she was debating about the European resolution has shown the strong determination of our Deputy to improve the European pediatric regulation and develop specific medicines for children with cancer.

« While the Commission will soon evaluate the current regulation, it is essential to make substancial improvements ».

« Go, fight, win. Those words were in Margaux’s notes, today we are the guardians, it is our mission to fight and to win for every sick child. Mister Commissioner, I count on you, you have to help us not to loose in this field. »

Rémy Petitot, working with Mrs Grossetête at the European Parliament, mentioned that the day after the debate, the resolution was voted almost unanimously.

«It is a strong political message, but it is a step. We need to keep pressure on European Commission and its members.»

Delphine Heenen, Anne Goeres, at Unite2cure, gather a pool of different European Associations that, all together, lead many national and European actions to improve European regulation.

The vote on resolution by the European Parliament is a major step. The next one is now to answer to the public consultation, before February 20th, 2017. French associations who are interested can get in touch with Patricia Blanc.

Mobilization is essential as it is after the review of answers that the Commission will deliver the decision on the modification or not of the pediatric Regulation.

Professor Vassal mentioned on this subject that the Health European Commissioner has tweeted « children first » and has encouraged to respond to the public consultation after his speech during the SIOPE meeting (European Society of Pediatric Oncology) on January 27th.

Patricia Blanc, President of the Association Imagine for Margo :

« We have shown today that things are moving forward, there is a good combination of both will and actions from everyone (…)

We should not think that we could stop here, that we won. We have to continue. It is because we have succeeded to launch this dynamic that we still have to mobilize and to keep on working and collaborate all together. Let’s keep on fighting, let’s continue together to win for the children »

Catherine Deroche, President of the French Senate committee on Cancer : « Now there is a new step to climb, and it is this new stage that we need to take. In the projects that will have to be implemented and mainly the commitments taken, there is this true commitment to place french research and also the access to treatments in the debate. »

Mrs Deroche has also announced the launch on Senator JF Rapin’s initiative of a proposal of personal donation of 1000 € by each senator and deputy in favor of Gustave Roussy Foundation to develop project MAPPYACT and sequencings of children tumors.

A Big THANK YOU to all stakeholders, participants and volunteers.