On Saturday May 21, more than 120 drivers of sports and vintage cars gathered at the Château de Goulaine for the 2nd edition of the Rally of the Cœur de Nantes. Under a blazing sun, the big-hearted pilots of this solidarity event drove in order to accelerate the fight against pediatric cancers. 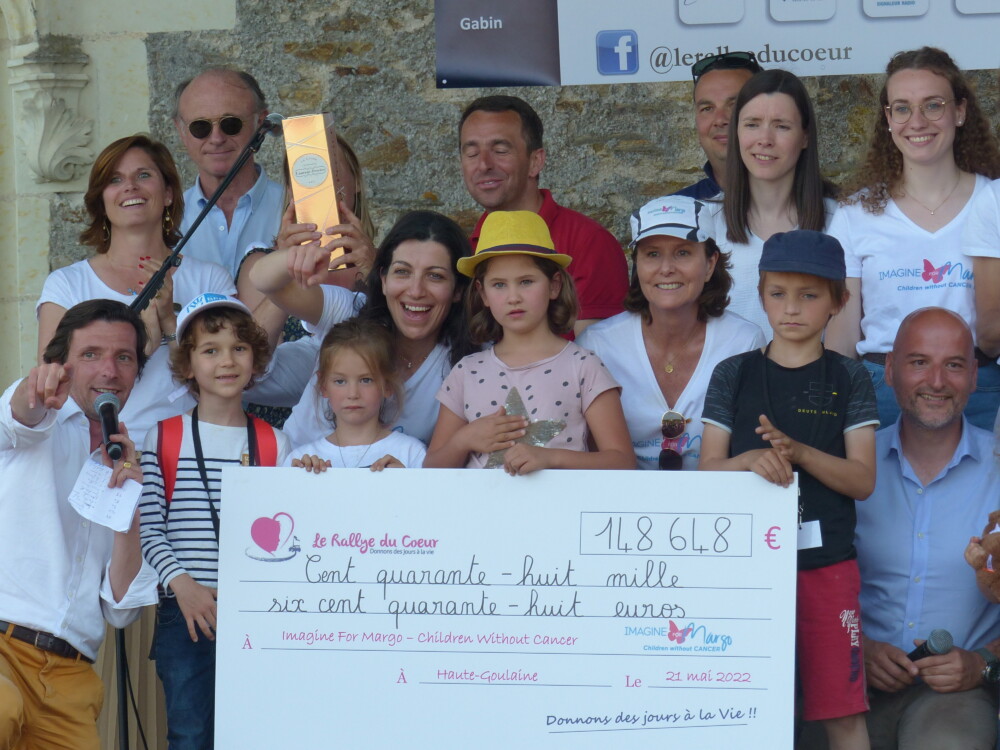 During this day, each participating crew sponsored a little warrior (some of them remotely). Thanks to their exceptional mobilization, the generosity of the drivers, their donors, partners and sponsors, more than €148,000 was collected and donated to our association. With this second edition, the Rally of the Coeur de Nantes once again confirms its status as the leading charity rally in France.

For Patricia Blanc, Founding President of the Imagine for Margo association, ”the Rally of the Coeur de Nantes has become, in just two years, a flagship event for all of us in our fight. A huge thank you to Geoffroy de Susbielle, Ismaël Vukovic and all the partners and pilots of the event who, each year, give many smiles to children and a boost to the fight against pediatric cancers. It is by continuing to mobilize all together that we will be able to win the race against the leading cause of death by disease among children in France and Europe. GO, DRIVE, WIN for a world with cancer-free children! “

Geoffroy de Susbielle, Director of the Rally of the Cœur de Nantes, wanted to highlight the mobilization of all the drivers: “Only 7 months have passed between the 1st  and 2nd edition of the Rally of the Cœur de Nantes. It was a difficult choice, but which allowed us to reconsider our initial wish to organize the Nantes edition in May. Despite this proximity of dates, all the partners have renewed their commitment and the crews have done a colossal job of collecting donations. Thanks to them ! Finally, like last year, we were welcomed in this beautiful castle that is the Château de Goulaine. Under a radiant sun, the day could only be beautiful! The financial result and the smiles of the dozens of children present and their families did the rest… Can’t wait for 2023! »

MORE THAN €148,000 RAISED FOR RESEARCH AND THE WELL-BEING OF CHILDREN DURING THE RALLY OF THE COEUR DE NANTES

The funds raised during this solidarity event will be allocated both to a scientific study and to various well-being projects for the children followed at the Nantes University Hospital.

As a matter of fact, the program of Sophie Fougeray from INSERM, resulting from the call for projects evaluated by the Scientific Council of the SFCE (French Society for the fight against cancer and leukemia in children and teenagers), has been selected to receive funding from Imagine for Margo. This study aims to determine the effectiveness of a highly targeted immunotherapy treatment on infiltrating brainstem gliomas. The objective is to find a new treatment for these cancers that we do not know how to cure today and for which the average survival of children is less than a year after diagnosis.

Another part of the funds will be used to act on the well-being of children followed in the pediatric oncology department of the Nantes University Hospital (equipment, activities, etc.). Imagine for Margo and its partner Le Rallye du Cœur have decided to finance this year, at the University Hospital of Nantes, the activity of Florence Hervouet, socio-aesthetics for one year: “The socio-aesthetic care provided during the sessions allows children with cancer to help them maintain their identity and regain self-esteem. A sweet break, relaxation, advice and personalized care to overcome some of the adverse effects related to the heavy treatments they undergo. The objective is to provide them with comfort, relief, reassurance in order to promote the healing process in the face of the disease”.

The fight continues with a 2nd annual meeting, Saturday June 18, at the Domaine de Dampierre for the 6th Parisian edition!