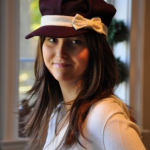 Margaux was born in Johannesburg, South Africa, on September 26, 1995. She was our first child, our first daughter, an immense moment of happiness. I remember Descilia, her South-African nanny singing Zulu songs to her, carrying her on her back wrapped on a large sarong. Margo would keep contact with her for a long time.

Some months after Margaux’s birth, we came back to France, in the Paris region, and Margaux got close to her cousins. That was the period of week-ends in the Normandy at her grandparents house, soft and tender moments. Afterwards, the arrival of Floriane, our second greatest happiness, on Halloween’s day 1998. Our daughters would grow happily, undisturbed, without a care and full of life.

In April 2000, we set off to New York, where we would stay for over 6 years. Margaux was keen on learning and trying new things, and loved being surrounded by friends – that was very important to her. She learned playing the piano, electric guitar (yes, in CM2!), classical dancing, tap dancing, gymnastics, scuba diving… Those years in NY (the time she was between 4 and 11 years ) would always remain engraved in her heart, above all, her friends at the French American School of New York (FASNY). She became bilingual. She will always keep the pictures of her girlfriends on her desk, and would never forget parties and birthdays. Margaux was a loyal friend.

Our return to France in 2006 was a tearing up, and joining a grand French school in 6th grade, where she did not know anyone was difficult. Fortunately, the Institut Notre Dame (Saint Germain en Laye) is a bilingual establishment, which helped to keep ties with New York.

The 6eme degree marks the beginning of a new life, new friends, and new passions such as horse-riding, contemporary dance and cheerleading! Margaux found on her own over the internet a group of “pom pom girls” of the American Church of Paris!  I did accompany her every Saturday morning, for her biggest delight!

September 2008, Margaux is 13 years old and begins the 4eme degree. All goes well. She is well accustomed to France, on the honour roll at school, surrounded by very good friends. She goes back regularly to NY to see her friends and set off to Summer Camp at Chinqueka, that she loves so much! Our almost-teen flourishes and shines.

Tuesday 10 February, 2009, in the morning. Margaux vomits and has a strong headache. The same day, I consult two doctors who diagnose a gastro, but her condition does not improve. Saturday 14 February, 2009. Margaux is very ill. We call the ambulance and leave for the hospital. Three doctors auscultate her but can’t find anything. At my insistence, Margaux leaves to have a scan. It’s at that moment, while waiting, that I had a very bad feeling. A few minutes later, the verdict falls: “Madam, we know why your daughter has such a headache. She’s got a brain tumor. The ambulance is waiting, you are leaving right away to go to Necker Hospital for further examination”.

That precise day, our life changed abruptly, and from then on, we did not any longer master anything. That was the start of a tough battle that lasted 16 months.

Margaux departed in our arms, surrounded by all our Love, on 7 June, 2010.